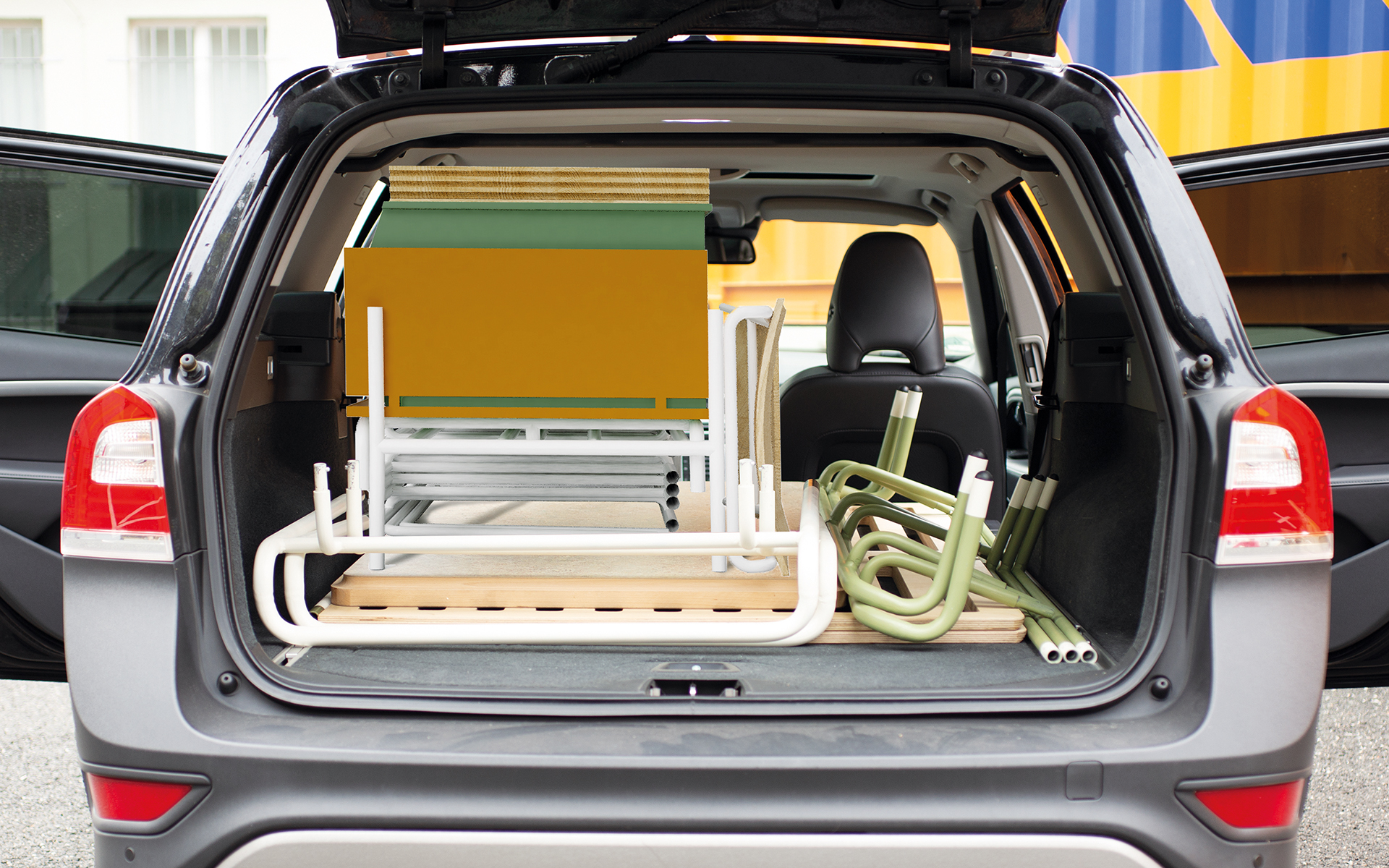 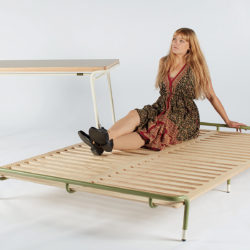 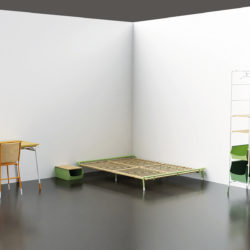 "Kulturkonfekt" is a furniture series - designed for the loading space of an estate car - consisting of a bed frame (140x200cm), a table, a chair and an adjustable storage system.

Planned obsolescence and trained mass consumption behavior were the triggers for the emergence of the throwaway society. Purchasing new resources proved to be more efficient for production than a costly recycling process of the disposed raw materials. Clothing and furnishing objects became fashion items - the emotional value attached to the objects was thus given an expiration date. Our furniture consumption increases by 150% every year! In Germany alone, 7 million tons of old furniture are produced every year. Recyclable items often end up in bulky waste due to the lack of efficient collection systems. Furniture used to be investment goods due to their high prices and good quality (mostly solid wood from the surrounding area) - people bought furnishing goods for their entire lifetime and beyond (inheritance). Modern living trends already show that, as a countermovement to the consumer society, more and more people want to own less. On the one hand, the realization with regard to the consequences of the throwaway society has had a lasting effect on part of the youth to a more conscious handling of possessions, on the other hand, modern working conditions were the trigger for a flexible living culture, which due to expected changes, such as frequent changes of location, makes extensive furnishing unmanageable for those concerned. The number of moves within Germany has increased in recent years. On average, 18-29 year-olds move particularly frequently. The reasons for this are higher student numbers - 80% of students do not live with their parents - and the aforementioned change in the working world. Working people today do not stay long in one job due to increased temporary employment. For short-term furnishing, people often go to "Ikea" - the furniture is cheap and easy to replace, so some of it is left behind when people move. However, the use of the goods as "disposable furniture" is a problem for the environment due to the artificially shortened lifespan, with regard to the energy and raw materials used in production. In the context of the project I refer to young people, students, young professionals and freelancers etc.. In other words, a group of young people from 18 to about 30 years of age who still have a longer development path ahead of them and have to act flexibly due to their training and jobs. In addition, this target group is more open to adopting future-oriented design approaches that would mean doing without for people who are already sedentary. Through the high utility and a timeless design of the stowable basic furnishings, the users should re-establish an emotional connection to the object and view it as an investment good with long-lasting use, which would have a lasting impact on the consumer behavior of my target group. My design should offer the young target group of temporary living a long-lasting, more environmentally friendly furnishing alternative.

In order to achieve the project objective, it is necessary for the basic equipment to fit into the loading space of an estate car. The minimum dimensions of the car storage space of 160x100x70H centimetres thus influence the volume and dimensions of the furniture elements. The design of the furniture series does not follow trends but focuses on timelessness with recognition value and as few manufacturing steps as possible. This is an attempt to find a balance between affordability for the target group (or their parents) and the quality of a high quality design product. The plug-in connections of the tubular elements with spring clips and the simple insertion and attachment of the wooden and sheet metal elements mean that the materials can be separated from one another, so that the components can be recycled or the "cradle-to-cradle" process is conceivable.

In my project I specifically address people in temporary living situations in order to develop a more durable alternative for their living space design. The big improvement in my design compared to similar products on the market is that in my concept the transportability has been taken into account, so that the furniture is more optimally tailored to the lifestyle of the target group. It is also a special approach to intervene a young and teachable target group with a functionally optimized product in order to create a more conscious consumer behaviour.

The unique selling point of the basic furnishing "kulturkonfekt" is that the most necessary pieces of furniture of a basic furnishing form a series that fits together in the trunk of a station wagon (and other cars) and thus allows moving with only one car journey (including driver and passenger).