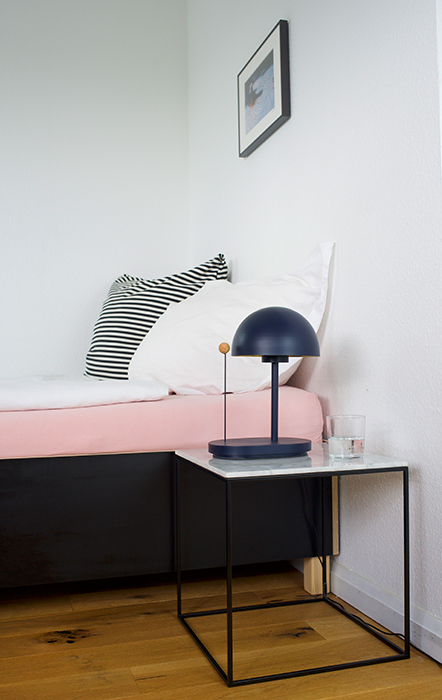 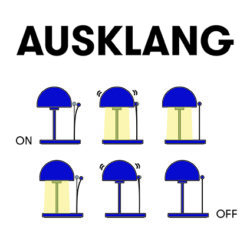 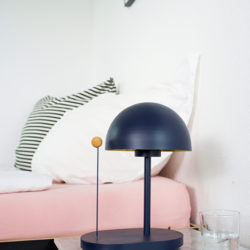 My bachelor thesis is the creation of a slow-down product as a bridge-building object for mindfulness-based stress reduction with the focus on the phase of falling asleep. The aim is to create relaxation through auditory and visual monotony and to stimulate the interoception and sensitisation of the user to the preciousness of sleep. The establishment of a sleep ritual is linked. The result is the table lamp AUSKLANG, a slow-down product to sensitize the user to the preciousness of sleep. When the mallet hits the lampshade, the soothing sound of the singing bowl is heard and bathes the surroundings in warm light - a new phase begins. The sound is regarded as an auditory clock and heralds the phase of falling asleep. The ritual helps the user to actively and consciously say goodbye to the productive time of the day and to take care of regeneration.

The creation of the table lamp with analogue sound function is based on a well-founded theoretical work, which deals with the topics of falling asleep, sleep history and the significance of sleep in Western society as well as the prerequisites for falling asleep, relaxation; singing bowl therapy and the examination of rituals. The topics were presented through various test series, interviews, workshops and photographic documentation of sleeping places. Sleep is one of the basic biological needs of humans, just like warmth and food. Not yet abolished by evolution, but perceived by many as a nuisance, it cannot yet be controlled, makes us incapable of action and almost unconscious. In science, it is still considered a little-explored field, but the striving for control over it is also reflected in the products that appear on the market. Attempts are being made to circumvent or optimise it with a variety of products and means. The stimulus satiation of the day, constant accessibility, flexibility and the striving for innovation and self-optimization form a strong contrast to sleep - the "unproductive", passive side of the day. In a society in which performance counts and people make their mark through professional success, sleep is, as is so often said, "sleepy time" or something you can still do when you are dead. It is not only part of life but essential for life. We have to regenerate ourselves in order to function. Decisive for the choice of topic was the observation that many people try to come down after the working day with a beer or a glass of wine, television and surfing the internet. Isn't the daily glass/bottle of wine in the evening a little bit of an attempt to shorten the period of falling asleep, to make it easier to relax from the day? Although this is known to be unhealthy and not conducive to sleep. They do not consciously devote themselves to the transition phase, but rather repress the moments when they are alone with themselves and for themselves and instead prefer to distract themselves.

In my search for relaxation, I came across products that have an esoteric, often Hindu, appearance. By its appearance, it excludes those who do not feel part of the community. Products for sleep optimization, on the other hand, appear very clinical and look like foreign bodies in a homely ambience. The table lamp transforms the function of the relaxation method into an everyday object with a familiar, homely design. It is based on the archetype of the table lamp. The graphic appearance is due to geometric shapes. Simple geometries, unadorned, unexciting and comprehensible. The design language is restrained and unagitated, so that the user is not stimulated by visual stimuli before falling asleep. The mallet on the side of the lamp is inspired by a model of the solar system, which takes up the theme of day and night and the endless expanse of the night sky/universe. The light is switched on and off via a touch sensor. When you pull up the pinhead, it springs back, strikes the screen, which is in turn connected to the touch sensor, and the light is switched on. In addition, the sound of the bowl, which serves as a lampshade, is heard. Its attachment is a pin soldered to the inside of the bowl, which is inserted into the upper part of the suspension. This prevents the bowl from slipping and rumbling down, but does not fix the bowl as much to allow the sound to vibrate.

The lamp is switched on by touching the lampshade. The vibrating and calming sound of the singing bowl is heard. The association with the gong - which initiates a ritual - is obvious. An object that can be found on almost any bedside table becomes a ritual object in addition to its conventional use. The luminaire as such is well suited for this, as it bathes the setting in a different light and thus emphasises the phase change.

What is new is the transfer of a thematic field (singing bowls) previously located in a spiritual and esoteric context via a creative translation into a contemporary language of form and an everyday living object, in order to take it out of its niche existence and make it accessible to several users. And the deliberate avoidance of digitalisation and optimisation mania at a point where these simply make no sense or are counterproductive.