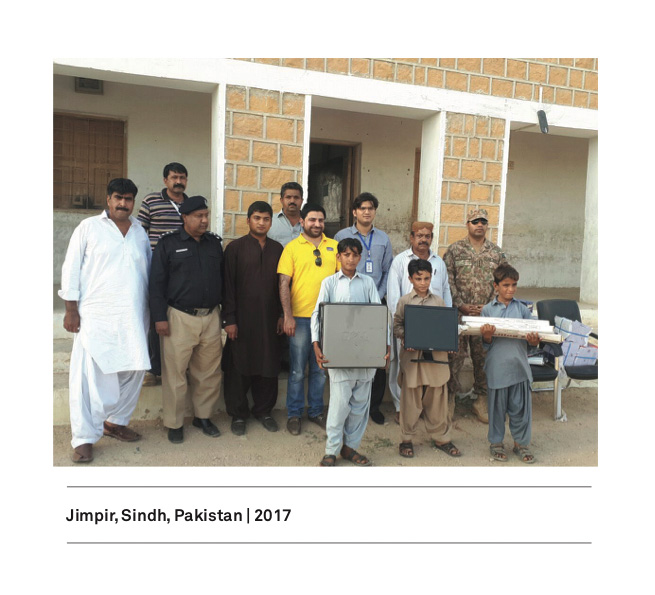 On Economic Development and Social Welfare in the Third World: A Community Research Project in Jhimpir, Pakistan.

A projected photograph followed by text. The photograph is taken in a fairly isolated desert region in Sindh, Pakistan, originally intended to highlight and prove the implementation of a Corporate Social Responsibility (CSR) program dictated by a foreign institution as part of their financial investment in a local wind farm.

The work concerns itself with critical reflection, empathy and our understanding of communities that are confronted with interventions by the West to “improve” living conditions abroad, especially in developing countries. It’s a fundamental question, for social designers, artists, activists and institutions that practice across borders, on how we perceive, are perceived, and consequently place ourselves in the social and political reality of a community elsewhere in order to critically recognize the impact of our intervention.

The photograph and text together contextualize the impact of such interventions. The photograph intends to reflect the reality in a way they (the community) imagine we (the West) want to see it. Representing a formal construction of society, through authority (police and army) and objects that reflect progress (computers). The honesty, although unintended, is there. They are holding the computer as an object, reflecting it’s physical presence, but it’s usability is not a subject.

With globalization, our awareness of socio-economic disparities and willingness to intervene and invest across borders is at a rise. These interventions, despite good intentions, can have adverse impacts due to a lack of empathy, and understanding of preexisting socio-political structures in a society, when problems are studied under definite conditions. Poverty is a classic example of a “wicked problem” where it is difficult to identify it as a primarily income or resource based problem, but rather one that equally relies on social and political issues, such as social exclusion and lack of political representation. If we limit poverty as an issue of income and resources, it negates co-related issues such as social structures, abuse of power and exclusion, making it an ill-formulated problem which may address a part of it, but fails to acknowledge other aspects that need to equally be addressed.

For now, I want that we reflect on our own understanding of a world that exists so far away from us. Not only in terms of geography, but more importantly for now, in its aesthetics, politics and social reality. And if the best we can come up with is for it to look more like our reality, surely we are missing out on context that allows us to open our eyes to something that lacks in us, and not in others. Otherwise, how far have we evolved from the time of The White Man’s Burden?